“Pterodactyl Show and Tell” was written by Thad Krasnesky and illustrated by Tanya Leonello. “A stuffed animal, a favorite book, a new toy… that’s what most kids bring for show-and-tell. But when one boy brings his pet pterodactyl into class, prehistoric pandemonium prevails. Kids who dig dinosaurs will devour this preposterous pterodactyl tale.”

*Permission for the reading of this book in its entirety was granted by Flashlight Press.

“Hammer and Nails” was written by Josh Bledsoe and illustrated by Jessica Warrick. “Darcy has plans. She and her friend are going to play dress up, do each other’s hair, and polish their nails. Daddy has plans too. He’s going to read the paper, mow the lawn, and fix the fence. When Darcy’s friend cancels and she’s sure her day is ruined, Daddy suggests Darcy-Daddy Day. But will Daddy play dress up? Will Darcy like yard work? Join the fun as Darcy and Daddy tackle their to-do lists together.

*Permission for the reading of this book in its entirety was granted by Flashlight Press.

Today’s Storytime Saturday is the third and final book in the My First Science Textbook series. “Protons and Neutrons” was created by John J. Coveyo, written by Mary Wissinger, and illustrated by Harriet Kim Anh Rodis. It’s the story of an important friendship between subatomic particles Pete the Proton and Ned the Neutron. With its simple story and bright, colorful illustrations, this book makes chemistry interesting for even the youngest readers!

*Permission for the reading of this book in its entirety was granted by Platypus Media.

Originally published in 1958, Animal Orchestra is by Ilo Orleans, with pictures by Tibor Gergely. This story gives children the opportunity to be a part of the audience, as a variety of animals celebrate music by performing in an animal orchestra. The rhyming text of this Little Golden Book provides the perfect rhythm for an exuberant read-aloud!

“The Elephants Come Home ~ A True Story of Seven Elephants, Two People, and One Extraordinary Friendship” was written by Kim Tomsic and illustrated by Hadley Hooper. “One day in 1999, Lawrence Anthony and Françoise Malby hear that a herd of wild African elephants need a new home. They welcome the elephants to their wildlife sanctuary—Thula Thula—with open arms. But the elephants are much less sure they want to stay. How will Lawrence prove to them that they are safe and loved? What follows is a gorgeously illustrated real-life story of a friendship . . . and the story of the miraculous way that love given freely will return—greater and more wonderful than it began.” This is Storytime Saturdays Episode #92 with Children’s Author & Librarian, Phoebe Fox.

Permission for the reading of this book in its entirety was granted by the author, Kim Tomsic.

“Pantaloon” is a Little Golden Book written by Kathryn Jackson and illustrated by Leonard Weisgard. This is the story of a bicycle-riding, hat-wearing Poodle with a sweet tooth. Pantaloon loves to eat cakes and cookies and believes he’s quite capable of making them. So when the baker in his town posts a “Help Wanted” sign, Pantaloon applies for the job. Will he be chosen to be the baker he has always dreamed of being? My Doodle, Hank (who looks an awful lot like Pantaloon), helped me with this deliciously fun read-aloud! Won’t you join us?

Let’s celebrate Armed Forces Day with a reading of the children’s book, “Ajax, Bound for Glory,” and a demo of how to draw the main character with the illustrator herself! This picture book was written by Sarah E. Dautel and illustrated by her sister, Hannah E. Dautel. Ajax, the rabbit, has high hopes of being a valiant warrior, but tragedy strikes. With his new prosthetic leg, Ajax realizes he will never hop again. He must find a new way to contribute to the military he has always dreamed of being a part of. “Ajax, Bound for Glory” is a story of ambition and perseverance that celebrates the power of music! Following the reading of this book, Hannah E. Dautel demonstrates how to draw rabbits using a simple circles and shows her process for creating Ajax.

Permission for the reading of this book in its entirety was granted by the author, Sarah E. Dautel.

The Light in Me Sees the Light in You, a newly released picture book, written and illustrated by Lori Nichols, has made its debut at the perfect time. Last year was, sadly, a year of loss for many children. (There has been much to grieve for all of us during this pandemic.) With its simple, sweet story of friendship and beautiful watercolor and colored pencil illustrations, this book is a gentle introduction to the subject of loss. I am honored to share it as a Storytime Saturdays book and hope that it helps children everywhere.

Permission for the reading of this book in its entirety was granted by the publisher, Nancy Paulsen Books.

This unique counting book by Amanda Malek-Ahmadi is beautifully illustrated by Katherine Gutkovskiy. It is a perfect fit for young children interested in ballet, dance, and/or the performing arts. Authentic ballet terms are used throughout, and each one is explained in the book’s glossary, complete with pictures. Educational and fun, this book is a delight!

*Permission for the reading of this book in its entirety was granted by the author, Amanda Malek-Ahmadi.

Sofia’s Stoop Story, 18th Street, Brooklyn was written by Teacher, Reading Specialist and Children’s Author, Maria LaPlaca Bohrer, who lives on Long Island in New York. The book’s illustrations were created by Steve Johnson and Lou Fancher, who have collaborated on over 50 books for children. “On a stoop in Brooklyn, in the 1960s, Uncle Frankie begins telling Sofia and her cousins a story about the day he met Carl Furillo. Meanwhile, Sofia’s Nana is next-door, preparing the Italian family’s Sunday dinner. Nana calls Sofia and sends her on errands to buy cheese, bread, and cannelloni. Sofia returns to the stoop, only to discover that Uncle Frankie’s story is over, and it’s time to eat. When uncle Frankie realizes Sofia is upset because she only heard bits and pieces of his story, he shares his historic tale from beginning to end, and he gives her keepsake that he’s saved since 1947.”
*Permission for the reading of this book in its entirety was granted by the author,Maria LaPlaca Bohrer.

Available now in the Shop! 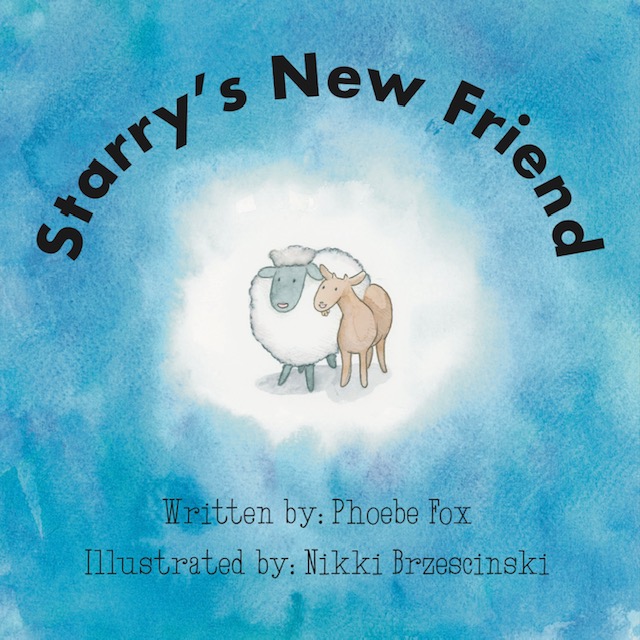 The third book in the Starry the Sheep series has arrived! Head to the SHOP to order your signed copy today!

Panda Proud is a limited-edition book. Order your signed copy or "giftset" today!